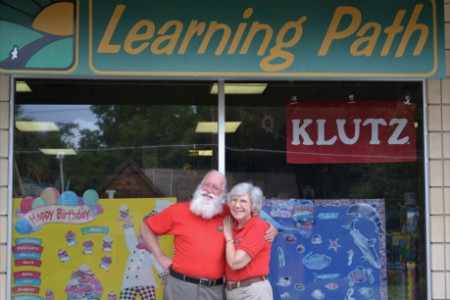 Usually when we blog here, we speak as the business – David Greenberg Communications. Today, I am doing something different – speaking as the original owner and now partner in this agency.

David Greenberg Communications celebrated 15 years in business in March, and for about half that time, we have had The Learning Path Store as a client.  Hugh and Betty McDowell, who have run the store since 2007, were never our biggest client – but they were special.

Betty was one of my daughter Kayla’s teachers at the B’nai Israel Day School from kindergarten to fifth grade. I believe it was the same year Kayla graduated that Betty retired for the second time, and for the second time it did not stick. Instead she and Hugh bought The Learning Path Store on NW Sixth Street. When they took over the store, they became a client. For a short time, when she was in middle school, Kayla even did reviews of some of the store’s products.

If you’re not familiar with the store, that’s your loss. The Learning Path Store is an institution. It has been around more than 30 years providing excellent supplemental educational material for teachers, parents and grandparents.  And since Betty took over (spoiler alert), you can even find Santa at the store on a regular basis. For years, Hugh, an official graduate of the oldest Santa Claus school in the country, has been entertaining children in North Central Florida. The good news is that will not change.

But Gainesville will be worse off without The Learning Path Store. Unfortunately in today’s economy it is a dying breed, and efforts to find a buyer to continue its legacy have so far been unsuccessful. I will still get to see Hugh and Betty, who also serves as Mrs. Claus. But the institution will be gone, and that’s too bad. I will miss it.

Meeting with Writer's Association of Gainesville

The Pavilion on 62nd